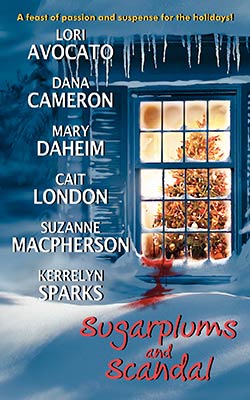 Sugarplums and Scandal is an anthology of six novellas—
Three Mysteries and three Romances, all with a theme of Christmas!

In “A Very Vampy Christmas,” Maggie O’Brian takes a job at the Digital Vampire Network (DVN) as an actress on the soap opera, As a Vampire Turns.  Her leading man is Don Orlando de Corazon, the greatest lover in the vampire world.  But who is Don Orlando really?  Even his hairdresser doesn’t know for sure.  Maggie and Don Orlando travel to New Orleans and Texas in search of his mysterious and crazy past.

“In Kerrelyn Sparks' "A Very Vampy Christmas," sweet vampire Maggie O'Brian helps amnesia victim/soap star Don Orlando, a.k.a "the greatest lover in the vampire world," discover the secret of his past. The camp hilarity of this story both mirrors and gently mocks daytime TV with its dramatic pauses and far-fetched plot twists. As always, Sparks brings home the love through the laughter in this fun tale.”

Sharon Forret, Happily Every After 5 stars

“Kerrelyn Sparks writes a phenomenal vampire story! "A Very Vampy Christmas" is no exception as the humorous interaction between Maggie and Don Orlando will keep the reader laughing while the growing romance between them is sweetly sensual. Ms. Sparks has a definite eye for detail and it is the little things that she includes that really make her vampire stories work. "A Very Vampy Christmas" concludes this anthology with a bang and should generate new fans for Ms. Sparks with this spectacular story.”

“A Very Vampy Christmas is Kerrelyn Sparks's cherry on the top of this confection of a book--a love story of vampires in a hospital soap opera.”

Avon authors from the mystery, romantic suspense, romance and paranormal genres give readers a special holiday treat with tasty tales that demonstrates each author’s considerable talent.

As chapter one begins,  Maggie O’Brian is an actress on the vampire soap opera, As the Vampire Turns.

“It’s over, Don Orlando.” Maggie O’Brian lowered her gaze. The tears that blurred her vision had little to do with the role she was playing--Jessica Goodwin, mortal doctor, hopelessly in love with a vampire. Like any good soap opera actress, Maggie turned her back to the person she was addressing and looked sadly at the camera. “You must never come here again.”

“Don’t say that!” Don Orlando rushed to her side and sank gracefully to one knee. He seized her hand and kissed it. “My darling Chiquita, I could never let you go.”

Chiquita? What sort of cheesy person was writing this nonsense? Maggie inwardly cursed the writer while trying to ignore the way Don Orlando was brushing his lips against her knuckles. Sweet Mary, now he was nibbling her fingers.

But it meant nothing. He was only acting. Rumor had it he’d nibbled a lot more than women’s hands in the last few years.

The tear that rolled down Maggie’s cheek was worthy of a daytime Emmy. Unfortunately, her lack of a pulse during the day precluded her from attending the ceremony. And how could they give Emmys to a group of actors they didn’t know existed? Only a few mortals employed at the Digital Vampire Network knew about vampire soap operas, and they were sworn to secrecy. The mortals knew if they blabbed, they would pay in blood. Literally.

Maggie yanked her hand from Don Orlando’s grasp. “I’m sorry, but it was never meant to be.”

As Don Orlando rose, he flipped his black silk cape over one shoulder, revealing half of his muscled torso and a thatch of very black, very thick chest hair. Maggie knew this movement caused Vamp viewers at home to sigh in ecstasy. She should know. She’d been one of them. And if Don Orlando executed the famous double flip, throwing both edges of his cape over his shoulders to reveal his entire chest in its muscle-rippling glory, his female fans were known to swoon. No doubt, a few male ones, too.

Maggie wandered to the empty desk of her pretend office. “How many times must I tell you? This is a hospital. You shouldn’t come here without a shirt.”

“I couldn’t wait to be with you.” His voice sounded as smooth as his black silk cape. “And the nurses never complain.”

“You’ll catch a terrible cold.” She glanced at him over her shoulder. “Why, it’s snowing outside. It’s almost Christmas.”

He shrugged his massive shoulders. “Mortal diseases do not frighten me. I will heal during my daily death-sleep.”

Maggie pressed a hand against her chest and gazed at camera number two. “I swore an oath to protect life. How could I fall in love with one of the Undead?” She whirled to face him and pressed her hands on the desk behind her. This pose was designed to highlight her ample bosom. “That’s how you seduced me, isn’t it? You used some sort of insidious vampire mind control.”

“It was you who seduced me with your pure and noble heart.” His gaze lingered on her breasts. “I could not help myself.”

“I must resist you. Somehow.”

He bowed. “I am Don Orlando de Corazon, the greatest lover in the vampire world. No woman, alive or undead, can resist me.”

“But I must!” Maggie strode toward camera number two. “I’ve worked so hard to get where I am today. Years of med school, endless hours in the ER. And now, I’m a famous brain surgeon. People need me.”

“I am very proud of you, my Chiquita.”

“Don’t say that! I have a reputation to maintain. I need the respect of my peers. How can I have an affair with an undead trumpet player from a mariachi band?”

He lifted his chiseled chin. “I’m a very good trumpet player. And the greatest lover in the vampire world.”  He swaggered toward her, a hand on the low waistline of his tight black leather pants.

Maggie turned away with a gasp. “Don’t tempt me, Don Orlando!”

“Come away with me!” He pulled her into his arms. “We will make beautiful music together.”

She planted her hands on his chest to push him away. The ring on her right pinky finger gleamed under the stage lights, bright gold against the mound of coal black chest hair.

He embraced her tighter. “Kiss me and tell me you don’t love me.”

She turned her tear-streaked face to camera number one. “You’re so cruel to make me suffer. Please let me go!” She shoved hard at his chest.

He stumbled back. “Aagh!”

“Aagh!” Maggie’s higher-pitched scream joined his when she realized what had happened.

Grimacing in pain, Don Orlando pressed a hand against his now bare chest. And dangling from Maggie’s right hand like a dead rat was the mat of black chest hair.

“Aagh!” She shook her hand. “Get it off!” It flopped wildly around her hand, tangled in her pinky ring.

“Dammit, woman!” Don Orlando winced as he rubbed the red welt on his hairless chest. “You nearly ripped my skin off.”

“Cut!” Gordon, the director, yelled. “Makeup! We need Orlando’s hair glued back on.”

Maggie looked at Don Orlando’s bare chest, then at the furry pelt dangling from her ring. It was fake? Sweet Mary, she should have known. How many men had body hair like an English sheepdog? She ripped it from her ring and offered it to its owner. “Sorry. I didn’t mean to hurt you.”

Don Orlando’s mouth curled up, and he tapped the red splotch on his chest. “Want to kiss it and make it better?”

“No!” Maggie tossed the chest-toupée at him. “Why do you wear such a silly thing?”

He actually looked embarrassed. For about half a second. “They thought I would look sexier with more hair.” He gave her a lopsided smile. “Though right now, I’d be happy if I just had some skin.”

Maggie smiled back. For about half a second. Her amusement died when he checked out the makeup girl with a leering grin.

“Hola, pretty senorita,” he murmured to the makeup girl. She blushed as she painted his chest with adhesive.

“Shall we adjourn to my dressing room?” He winked. “We could bring the glue and get all sticky.” She giggled.

Maggie clenched her fists to keep from slapping him. Sweet Mary and Joseph, she was angry. She’d been angry ever since she’d found out that her adored hero, Don Orlando de Corazon, was nothing more than a womanizing pig. And now, she realized it was even worse. He was a totally fake womanizing pig.